Dec. 10, 2018 – Students at Wieland Elementary School had the opportunity to meet a local, award-nominated author last week and came away learning valuable lessons about chasing your dreams and being kind to others.

Donna Janell Bowman spoke to students about her book and its lessons. “Step Right Up: How Doc and Jim Key Taught the World about Kindness” is available at bookstores and tells the story of Doc Key and his horse Jim Key that could spell and do math.

During an age when animals were mistreated and abused regularly, Doc Key believed he could train his horse through kindness, and the pair became famous, appearing at The World’s Fair and touring the country displaying Jim Key’s abilities. 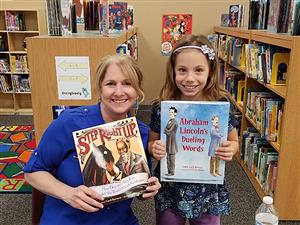 The belief that kindness has a powerful and lasting impact resonated with Bowman, and is what she hopes children learn from her book.

“Yes, the animals appeal to kids, but the kindness message no one gets it more than kids,” Bowman said.

Throughout her presentation Bowman also spoke of never giving up and learning from mistakes because as an author she has been rejected by publishers multiple times or told to revise her writing. All those failures and being told “no” would eventually lead to the “yeses” that would end up on bookshelves and in school libraries.

“I hope to inspire them to follow whatever dream they have as long as they never give up. Writing is all about rejection and perseverance and never giving up,” Bowman said. “When I was a kid, I really did think that authors were from New York City. That if you weren’t from New York City or some rich family that you could never become an author. So, yes. I want them to know it’s attainable for anybody who has a dream.”

She even had advice for students on how to become a good writer. The biggest key was being an avid reader. When we read, we exercise our “writing muscles” by exposing them to new words, stories, ideas and experiences that can fuel our own writing and creativity, she told the students.

Bowman grew up in Pflugerville on her family ranch with horses and attended PfISD schools through the 11thgrade. She currently resides in Round Rock and her background with horses helped trigger her passion for the story behind Doc and Jim Key and the message they could have for children in today’s society.

At the end of each of her presentations to students for “Step Right Up,” Bowman and the students take the Doc and Jim Key Kindness Pledge. The final words of the pledge are, “because kindness can change the world.” Those words are what she hopes resonate and can help children change the world around them and spread kindness.

And Bowman hopes that message can strike a chord and create change because of an experience she had early on while promoting her new book.

“I remember the very first school visit I did for ‘Step Right Up.’ I was selected to go to a Title I school in inner-Houston. … We did the pledge at the end and a little boy in the back raised his hand and he said, ‘What I want to know is that if so many people promised to be kind when Doc and Jim were alive, why is no one in Houston kind today?’” Bowman said.

“It stabbed me through the heart, but it also sparked this incredible conversation with this group of little kids about what kindness means. It can start with one person and spread. So why can’t we start spreading it today?”

“Step Right Up” is Bowman’s second children’s historical book with a third on the way next year. She also has written four informational books geared toward children about horses and Native American tribes.

“Step Right Up” was named to the 2018-19 Texas Bluebonnet Award Master List by the Texas Library Association, one of the most prestigious lists in the country for children’s literature. The book also won the Carter G. Woodson Award Honor from the National Council for the Social Studies.

Other historical children’s literature by Bowman include “Abraham Lincoln’s Dueling Words,” released in April and “King of the Tight Rope: When the Great Blondin Ruled Niagara’ is set for release in October 2019.