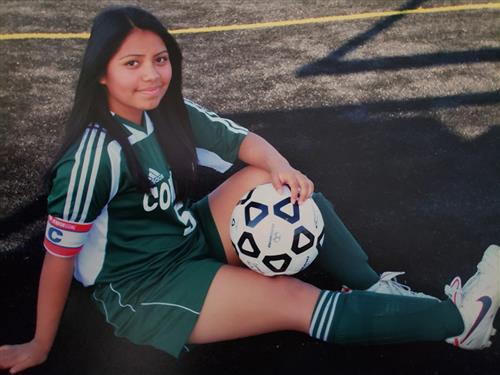 Recently, McCartney, as well as Connally volleyball coach Meghan Nichols, have watched as former players became teachers themselves, returning to the district they contributed to as students.

“They are incredible, and we are excited that they still continue to be a part of our CHS soccer family,” McCartney said. “We’re also lucky to witness them as they give back and make a difference in the lives of children and the school community that they grew up in.”

Nichols in February tweeted out photos of former players Esther Lee and Beatriz Valdez, who had returned to Connally to assist with her volleyball program. They returned as University of Texas alumnae, and as PfISD educators.

“Proud beyond words,” Nichols tweeted, adding “#FullCircle” to the post.

“It has been a rewarding experience for sure,” Valdez, a 2nd-grade dual language teacher at Ruth Barron Elementary, noted of her experience as an educator.

Now in her second year, Valdez began teaching shortly before the COVID-19 pandemic hit. Her first year was spent teaching both on Zoom and in-person.

“It was very challenging to say the least, but I hold that class very dear to my heart because we went through it together,” said Valdez, who also attended Dessau Elementary and Dessau Middle School.

Lee began her educational journey in PfISD, attending Parmer Lane Elementary in kindergarten before moving onto Westview Middle School and graduating from Connally. She has been teaching for three years, much of that time under the same conditions. However, she has learned about herself, and about what she considers important influences on her students: showing kindness, cultural appreciation and emphasizing a growth mindset.

“I have created so many meaningful relationships with students and families that I get to cherish,” Lee said. “I can definitely say that when I keep in mind all of those things, my classroom is a place where true learning takes place.”