Editor’s note: The following article is reprinted with permission. It originally appeared in the November edition of the Hawk newspaper at Hendrickson High School.

Max Poss looks around on his morning walk to the corner of Kelly Lane and Kenemer Drive, he then sees signs all the way down the street and on the corner with sayings like “Thank you Mr. Max” and “We love you Mr. Max.” He has no idea what they were doing there. He approaches the corner, parents from all over the neighborhood have cake and cookies for him to enjoy.

Today is Mr. Max Day, a neighborhood wide event to thank him for his service to the community. The high school band arrives to play songs for him, including a popular tune from his high school years called “Land of a Thousand Dances.”  Later in the day cars continue to drive by honking and waving at him. The celebration of Mr. Max Day made Poss realize that being a crossing guard is more than just a job.

Poss can be seen standing at the same corner every morning and afternoon in his bright orange vest, rain or shine, and has done so for the past eleven years. Local elementary, middle and high school students depend on him to get to school safely, crossing the bustling, wide intersection with his guidance. Poss, or Mr. Max as the children call him, serves the community every day, leaving an impact on current students and those who have long gone onto university and beyond.

Poss became the full-time crossing guard at this intersection when his successor called him to action because her foot had been run over. Since then Poss has become such a huge part of the community to the people he serves.

In his youth, Poss served in the Navy in the Air Traffic Control, and he feels like it gave him the proper training needed to be a crossing guard.

“I jokingly say that the two most dangerous places in the world are the flight deck of an aircraft carrier, and this intersection,” Poss said. “It’s a dangerous place, and that kind of thing helps me judge closing speed, speed, separation and all that kind of stuff.”

The best part of the job for Poss is the interaction he has with the kids and their parents. The amount of trust the children give him is clear to see. Standing with him for even a few moments multiple people say hello to him as he directs cars and helps them cross the street. They rush in the morning and afternoons to fill him in on the good and the bad events in their lives whether it’s about their dad coming home from Iraq and Afghanistan or their parents getting a divorce.

Mr. Max wishes he had gotten to Pflugerville sooner because of its small town values and big-small town attitude. He fears that with the exponential growth of Pflugerville it will lose the qualities he cherishes so much.

“Everybody cares about everyone else,” Poss said. “It’s growing so fast now I hope it does not lose that feel.”

His legacy and impact in our community is clear, and he knows there lies great responsibility in his job to ensure the safety of children and their parents in Pflugerville.

“In my teenage days we would say ‘that is heavy dude,’” Poss said. “ You don’t want to let anyone down, I know how they feel about me and I feel the same way about them.”

Poss has occupied a wide array of jobs, from his service in the Navy to being a pharmaceutical representative, but out of all of his jobs, being crossing guard is the one he feels like he’s meant to have.

“This is the best job I’ve ever had,” Poss said. “Of all of the jobs I’ve had, this is the one that’s the most endearing to me, I had to wait all my life to get to this point, but I’m here.” 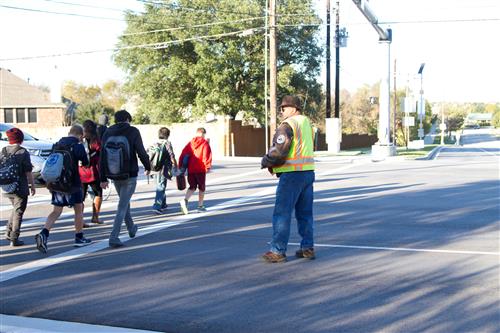